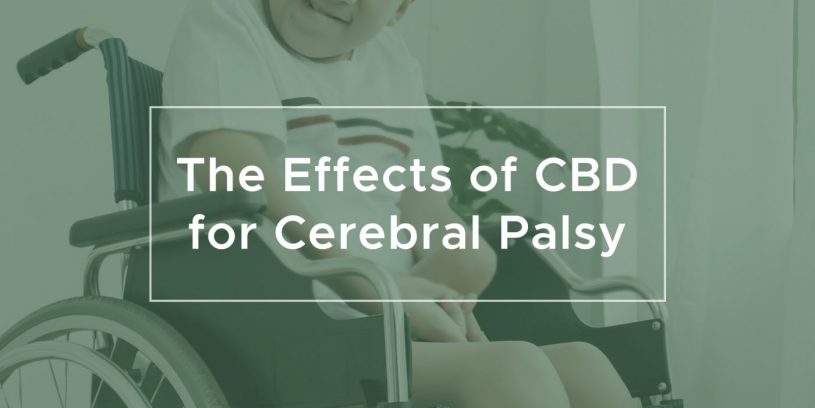 The word “cerebral” refers to the brain, and paralysis – a muscle weakness. Cerebral palsy is muscle weakness due to brain damage. It is a group of neurological disorders that restrict movement. CP is the most common cause of disability in children, directly affecting a child’s development.

It usually occurs when the brain is not properly developed during the gestation time.  Other causes of cerebral palsy may include:

It is one of the most common childhood coordination disabilities in children and apparently there is no cure for cerebral palsy till now.

Luba Blumkin performed one of the most relevant studies into CBD’s effects on Cerebral Palsy with the aid of a medical cannabis supplier Tikun Olam. The 2017 study, which was conducted by the Wolfson Medical Centre and analysed the effect of CBD on 36 children (aged 1-17) with cerebral palsy. 20 of the volunteers have finished the testing stage.

The study focused on kids with the highest level of motor disorders. After analysing the children for two months to ensure their conditions were stable, the team gave the kids CBD oil three times a day via a feeding tube or orally. Within four months, there was a noticeable improvement in their condition.

Blumkin asserts that the biggest positive change was in motor function.

Other benefits included less pain and an improvement in bowel movements and sleep.

A survey study by Adam Hirsh et al., published in the March 2012 edition of the American Journal of Physical Medicine & Rehabilitation, found that CBD oil provided the best relief for Cerebral Palsy patients when compared to several other medications. However, only 5% of the sample group had ever used the oil for pain.

Humans have an endocannabinoid system that is responsible for maintaining stability and balance in the body.  Endocannabinoids produced by the body activates the CB1 and CB2 receptors to regulate essential physiological functions of the body(Lara-Celador et al., 2013; White, 2019).  CB1 receptors are concentrated in our brain and nervous system which play a key role in controlling the voluntary and involuntary actions of the body.  Cannabinoids acquired by exogenous sources such as industrial hemp or cannabis Sativa can also help in activating the CB1 receptors(Di Marzo, Bifulco, and De Petrocellis, 2004).

Research has shown that CBD oil is quite effective in treating the patients of multiple sclerosis(Corroon and Felice, 2019).  It was found that these patients had a lower level of anandamide, one of the most prominent endocannabinoid that interacts with the the endocannabinoid system.

Scientist think that patients with cerebral palsy can also benefit from CBD as it can elevate the anandamide level.  CBD can also increase the ability of our endocannabinoid system to retain anandamide.  Research has shown that CBD can block the functionality of fatty acid amide hydrolase which works to break down anandamide(Chiurchiù et al., 2013).

How to use CBD for Cerebral Palsy

CBD for cerebral palsy can be used in a variety of ways such as oil, tinctures, and capsule serums, and topicals.  If you are looking for a fast delivery option among the CBD products can go for vaporizers or inhalers which can relieve the symptoms quickly.  However, the effect produced by CBD vaporizers is short-lived and fades off very soon.  Ingesting oral CBD dose in the form of pills capsules or edibles may take a little longer to show its effect but are a perfect option for generalized pain and discomfort(Oleinik, no date).

We need more research to prove how CBD can exactly work in the body to reduce the symptoms of cerebral palsy or treat it completely. While CBD oil is safe, it can’t be used as the only treatment.

Corroon, J. and Felice, J. F. (2019) ‘The Endocannabinoid System and its Modulation by Cannabidiol (CBD).’, Alternative Therapies in Health & Medicine, 25.

Oleinik, G. (no date) ‘The Different Types of CBD’.