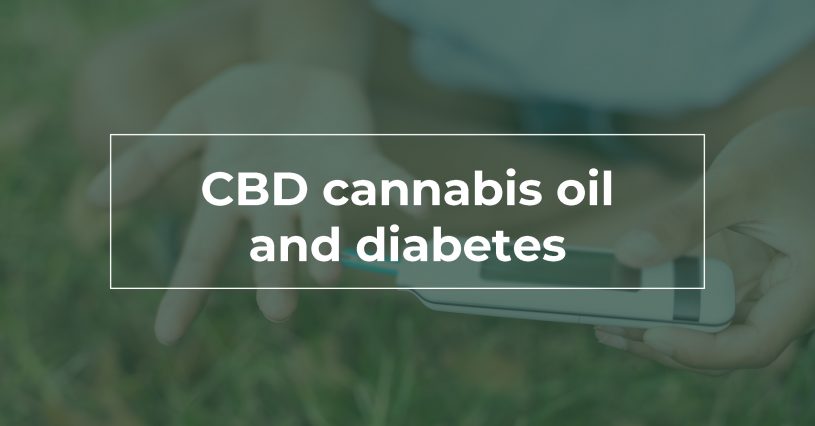 Extensive research has been carried out on CBD and other cannabinoids extracted from industrial hemp or cannabis Sativa.  CBD became incredibly popular for its therapeutic properties.  Several studies show that it can help in reducing anxiety, stress and pain.  Preliminary research has shown that CBD cannabis oil could also be very helpful in different diseases such as diabetes.

It is safe and quite different from THC or tetrahydrocannabinol, which is the main component of cannabis. Unlike its relative tetrahydrocannabinol (THC), CBD does not activate CB1 receptors in the brain and therefore lacks psychotropic effects. Instead, this substance is thought to work on the G-protein coupled receptor, endothelial cannabinoid receptor, and serotonin-1A receptors, among others.

The endocannabinoid system sets the sensitivity of the insulin response in adipocytes. This means that the endocannabinoid system plays an important role in how the body responds to insulin, increasing or decreasing insulin sensitivity. This is critically important for those who are taking insulin because it could mean that their blood sugars could rise or fall unexpectedly, making tight control more difficult to achieve.

Diabetes mellitus is a group of disorders that affect our bodies ability to process sugar or glucose.  There are two types of diseases called type 1 and type 2 diabetes.  Type 1 diabetes is characterized by an increased level of insulin in the body whereas; type 2 diabetes involves an increased level of glucose or sugar in the blood. The symptoms of diabetes vary according to the level of sugar in the blood.  However, the most common symptoms of diabetes are:

According to studies, CBD can delay the onset of diabetes, and reduce the occurrence of the disease significantly. This is because CBD acts as an immunomodulator (Mechoulam et al., 2007).

Type 1 diabetes is caused by the immune system attacks on the beta cells. These beta cells are responsible for the production of insulin. CBD can prevent cells from being destroyed. This maintains normal metabolism in the body. Glucose tolerance is improved and inflammation of the pancreas is reduced. CBD oil is also responsible for the regulation of oxidative stress in the kidneys.

Even though we need more research on how CBD can help in treating type 2 diabetes but enough research has shown that CBD can help in reducing the symptoms of the disease.  The analgesic properties of CBD are quite effective in reducing nerve pain caused by type 2 diabetes.  Applying CBD topicals on the affected areas such as feet can help with localized pain and inflammation.  The theory that CBD can reduce blood sugar levels needs more research and study as we have mixed results from different studies.  Moreover, most of the studies being carried out on how CBD can help with diabetes also involve other cannabinoids such as THC.

A small study published was in 2016, by the University of Nottingham researchers showed taking a hundred mg of CBD in combination with THCV tetrahydrocannabivarin helped lower blood sugar levels and increase insulin production.

A few researches carried out on mice and rats have shown:

Other studies have looked more generally at the body’s endocannabinoid system, which sends signals about pain, stress, sleep, and other important functions.

Oxidative stress and inflammation play critical roles in the development of diabetes and its complications.

CBD is available in different types of products, including capsules, tinctures, oil, vapes, topicals and sprays.  Since it is not regulated by the government authorities, not all CBD products are safe to use.  They may contain pesticides and contaminants which can aggravate your health condition.  Moreover, make sure to avoid taking CBD with blood thinners and other prescription medications and always consult your physician or supplier before trying CBD.