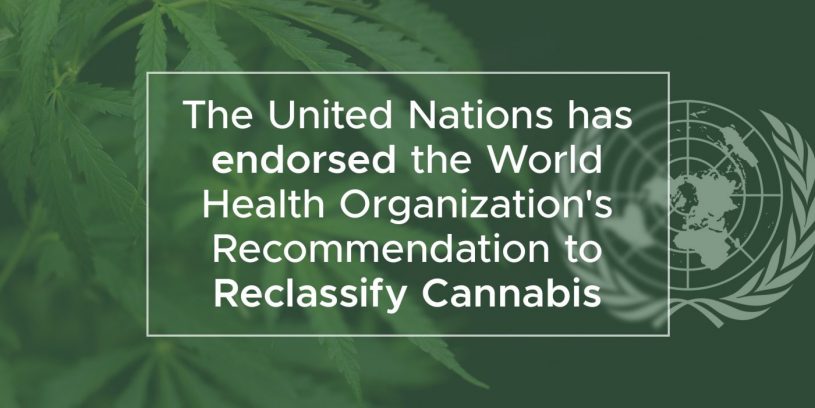 Substances in Schedule IV of the 1961 Single Convention on Narcotic Drugs are very dangerous and have no or very little medical value. Various discussions, research, and recommendations have been made over the years to remove cannabis from the list of most dangerous substances. There is ample evidence of the harms and benefits of cannabis. Therefore, after almost 60 years, international cannabis control is changing.

This historic decision will bring many benefits not only to the global medical cannabis industry but also to people who use cannabis products. This does not mean that cannabis will become freely available tomorrow, but the legal framework will undoubtedly be eased and the door will be wide open to research into cannabis, the development of new medications, and their use for medical purposes.

The United Nations Commission for Narcotic Drugs (CND) is the main drug policy-making body at the United Nations. This decision is crucial for global cannabis control. Although the situation is changing very slowly, the medical benefits of cannabis are gradually being recognized by the world’s most influential organizations.

Six scheduling recommendations on international control of cannabis and its derivatives were proposed by World Health Organisation at the 63rd reconvened session. The main point 5.1 of the recommendation, which suggested the removal of cannabis from Schedule IV of the Single Convention, was adopted. 27 voted in favour of the new amendments, 25 voted against and 1 abstained. All the other five remaining recommendations were rejected.

Point 5.2 recommended eliminating THC from the Convention on Psychotropic Substances of 1971 and transfer it to Schedule I of the Convention of 1961. With 20 votes in favour, 28 against and 2 abstentions, the recommendation was rejected.

World Health Organisation experts found that the effects of pure THC or the synthetic substitute Dronabinol were similar to those of cannabis, and therefore with the point 5.2 recommended to remove THC from the Schedule II of the Convention on Psychotropic Substances of 1971 and transferred to Schedule I of the Single Convention on Narcotic Drugs of 1961, together with cannabis, cannabis resin, extracts and tinctures.

The 5.4 recommendation to delete “cannabis extracts and tinctures” from the Single Convention on Narcotic Drugs of 1961 was rejected. 24 votes in favour, 2 abstentions and 27 votes against.

The 5.5 recommendation, which would have helped to resolve the legal situation with CBD products containing up to 0.2% THC, was also rejected. 6 in favour, 4 abstentions and 43 against.

Some countries who voted against stressed that they did not question the evidence gathered on the benefits and security of the CBD and were not opposed to cannabis. They simply voted against because the recommendation needed to be more specific, distinguishing CBD and THC cannabis extracts and tinctures.

There was a lack of strong WHO opinion and detailed guidance for the international validation of CBD products. For the past few years, WHO indecision and statements have greatly confused the world. A special committee of experts convened by the World Health Organisation has acknowledged that the use of CBD has not led to any dangerous side effects from health or addiction and that industrial cannabis products should be controlled as normal foods and food supplements.

It was later decided to add the CBD to the list of “novel food”, but due to the lack of clear registration steps and the uncertainty of control, the process was very complicated and expensive. Until recently, the WHO changed its mind and halted the process of listing CBD as a “novel food”. They recommended that CBD be classified as a drug or medicinal product.

On November 19th, 2020, The Court of Justice of the European Union has ruled that CBD products must be distinguished from the concept of “cannabis extracts and tinctures”, which are prohibited according to the Single Convention on Narcotic Drugs of 1961. In developing the general rules, only THC extracts were discussed, not CBD. The court’s findings state that each country must prove harm from this CBD cannabinoid to ban its trade.

The Canadian representatives also acknowledged that the WHO recommendation on CBD control would have received more support if it had been worded more precisely and in line with the structure and purpose of the Convention.

According to Canada, the available evidence on the safety of CBD does not meet the criteria for prohibited substances, CBD is not addictive and therefore cannot be controlled under the Convention of 1961.

According to Cornelis de Joncheere, chairman of the International Drug Control Board, it is time to change half-century-old laws. Decades of effort were needed to remove cannabis from the list of most dangerous substances. Gradually this is happening. It is only a matter of time before countries legalize cannabis internationally by consensus and based on available scientific evidence.