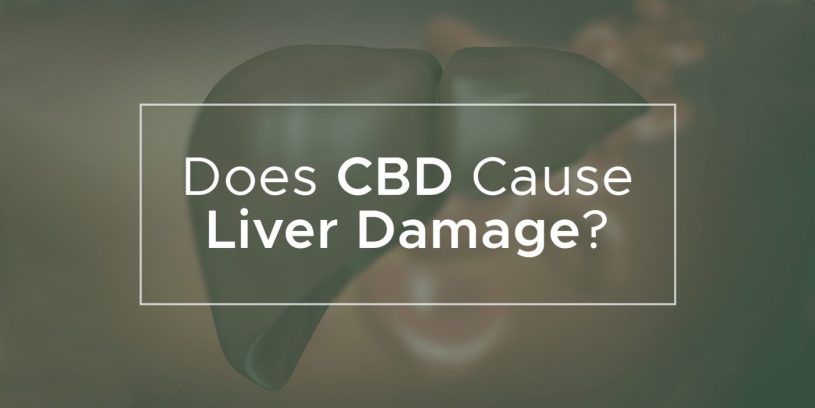 The liver is a vital organ that performs many functions, including detoxification, metabolism of medication, proteins, carbohydrates, fats, and other compounds, bile production, blood circulation, and so on.

The liver is a vital organ that performs many functions, including detoxification, metabolism of medication, proteins, carbohydrates, fats, and other compounds, bile production, blood circulation, and so on.

The liver can be damaged by a variety of endogenous or environmental factors. Infectious diseases such as hepatitis, jaundice, and others are the most common. The liver can also be affected by cysts, cirrhosis, or cancer cells, so proper liver condition is vital.

CBD has been shown to be a safe, low-toxicity, and effective phytocannabinoid, but there will always be sceptics who will try to rely on rumours or research of dubious origin to make unsubstantiated claims.

Most recently, in 2019, “Molecules”, a journal of dubious origin, sowed fear in people’s minds by publishing a study on CBD and possible liver damage. And well-known clickbait (earning money from people’s visits on the website) took advantage of that.

The study was unprofessionally analyzed by Mike Adams on the Forbes website (forbes.com). The publication states that “CBD can damage our liver just as much as alcohol or other drugs.”

This sensational statement was written based on a dubious study conducted by researchers from the University of Arkansas on the campus of Little Rock. For the sake of clarity, it should be mentioned that the study did not address alcohol at all or its damage to the liver, and the statement “our liver” should be replaced by the statement “mice liver”. [1]

People were not mentioned in these studies, which is a rather important aspect to keep in mind when publishing such sensational conclusions. Besides, real-world CBD users do not consume such large amounts of CBD as mice in this study. The highest dose given to mice for CBD toxicity in their livers was 0.25% of their body weight. A person never consumes such quantities and probably will not consume that much ever.

According to Forbes, “People taking CBD have an increased risk of liver toxicity” and CBD “can be just as harmful to our liver” as “conventional painkillers like acetaminophen (Paracetamol).” These statements are clearly not supported by the current literature.

Mice that Were Given Mega-doses

The breathtaking Forbes report focuses on one flawed pre-clinical trial and is falsely exaggerated. The study itself is freely available in the journal “Molecules”, published by Multidisciplinary Digital Publishing Institute (MDPI).

The statement in the annotation on the first page is completely impossible. It states that 75% of mice receiving 615 mg/kg CBD developed a fatal complication. There were 6 animals in the study receiving this dose. You don’t need a higher education diploma to make it clear that something is wrong here. 75% of 6 is 4.5. According to these researchers, four and a half mice died of a dangerous drug known as CBD, and one and a half mice somehow survived. [2]

The structure of the study is concise. The researchers forced mice to be fed single doses ranging from “lowest” of 246 mg/kg to “maximum” of 2460 mg/kg. This means that about 2.5 g of CBD was used per kilogram of body weight, which was formulated as a hexane extract. The product was supplied by NIDA (US National Institute on Drug Addiction). It is worth mentioning that hexane is classified as a neurotoxin.

The maximum recommended dose of the CBD isolate Epidiolex for humans is 20 mg/kg, which is 100 times lower than the dose given to mice in the experiment.

Research that is Wrongly Cited

Before presenting the results of the “fake” study in “Molecules”, the author stressed that their study is directed against the CBD, but it will not be an official scientific study.

The authors erroneously denied the anti-inflammatory and antioxidant properties of CBD based solely on in vitro studies. They claim that CBD causes neurological, cardiovascular neurotoxicity, which can cause blood pressure to fall in humans.

To substantiate their conclusions, they provided nine sources, but eight of the nine sources were not related to humans, and the only study performed in humans did not show any toxicity. The study in humans was conducted by scientist Saoirse O’Sullivan. The study suggests that blood pressure may decrease from a 10 mg/kg dose of CBD in users. The findings of the study suggest that it plays an important role in CBD in the treatment of cardiovascular disease.

The findings have nothing to do with harm to the body or neurotoxicity!

Saoirse O’Sullivan contacted “Project CBD” and confirmed that their study, which shows that CBD lowers stress-induced blood pressure, does not support the publication in the “Molecules” magazine and the claims about CBD toxicity. The researcher says most of their research shows a positive protective effect on the cardiovascular system. [3]

Not Everyone Learns from the Mistakes

The controversial study of CBD damage in mouse liver appeared to many to be a failed attempt to prove cannabidiol CBD damage. But the researchers who conducted the study did not think so. A month later, another study by the same team of researchers appeared in the same journal.

The aim, methodology, and conclusions of the study did not change much. The researchers decided to evaluate the possible interaction between CBD and acetaminophen (Tylenol or Paracetamol) in female mice.

Similar to the first study, they used hexane (a neurotoxin) to isolate CBD from NIDA-supplied cannabis. The study report states that the hexane content of their preparation is up to <0.5% or 5000 μg / g.

Such a product is considered toxic and cannot be marketed even in the California recreational cannabis market, where the maximum level is 290 μg / g in hexane residue extract.

The amounts of CBD used were lower than in the first study, and no mice were injected with CBD. Instead, the mice received 400 mg/kg acetaminophen, thus maximally “loading” the liver.

Three of the eight mice that received 400 mg/kg acetaminophen (Paracetamol) and the allegedly low dose of 116 mg/kg CBD died within hours. Mice that received higher amounts of CBD survived. The results forced researchers to look for excuses. They hypothesized that a small amount of CBD was active and a higher amount remained ineffective.

So many doubts, as well as many baseless statements and erroneous citations of other studies, cast uncertainty on the adequacy of the findings of small-town researchers. In their research, they note that further study is required to learn more.

Wouldn’t it be easier for researchers to recognize that CBD is beneficial for improving liver function and that mega doses given to mice are impossible to consume in humans?

Hepatitis A, B, and C are considered a fatal liver disease that is associated with cirrhosis and liver cancer.

A study published in the journal “Pharmacognosy Research” evaluated the effects of CBD on hepatitis B and C viruses. 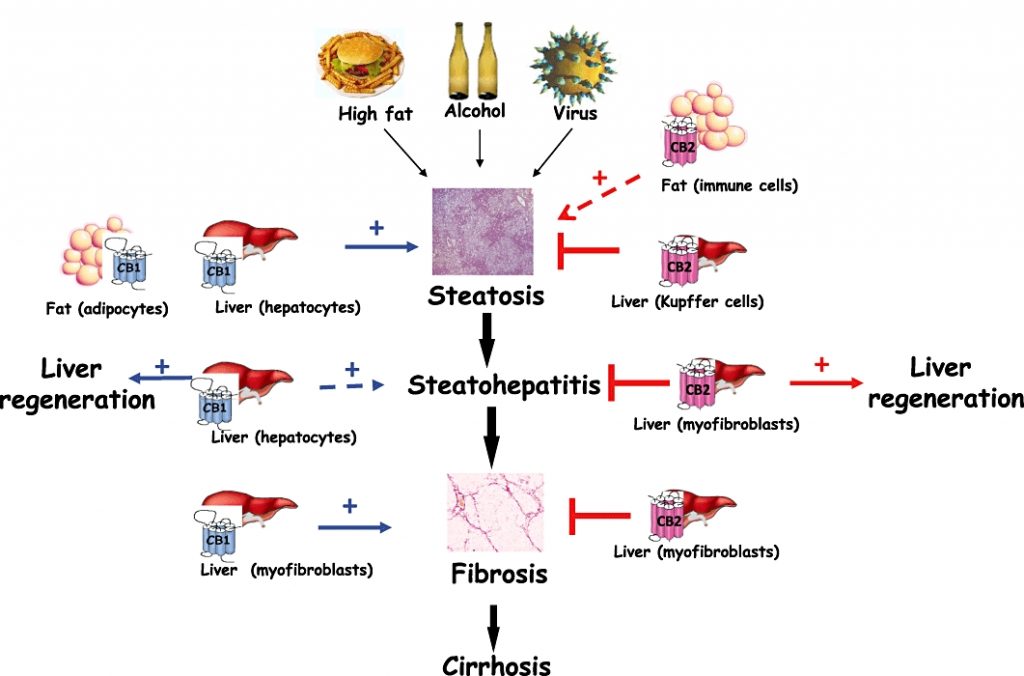 Virus-bearing cells were treated with CBD, and then antiviral activity was assessed. CBD was found to reduce hepatitis C virus replication activity by approximately 85%. The spread of hepatitis B virus cells was hardly affected by CBD but contributed to the destruction of damaged, infected cells by inducing an immune response. [5]

CBD inhibits the proliferative response of T and B cells, which are responsible for autoimmune attacks. Therefore, the proper use of this cannabinoid may be beneficial in the presence of autoimmune or viral hepatitis. [6]

CBD Interaction with Drugs and Medication

The main problem why liver damage can occur is the interaction of CBD with most pharmaceutical drugs. CBD is metabolized by enzymes of the P450 cytochrome system. Most drugs are metabolized by the same enzymes, so CBD can slow or speed up drug metabolism. In this case, the toxic effects of the drugs can occur because the liver is unable to process several different substances at the same time. The side effects caused by the drug can be incorrectly described as CBD damage to the body.