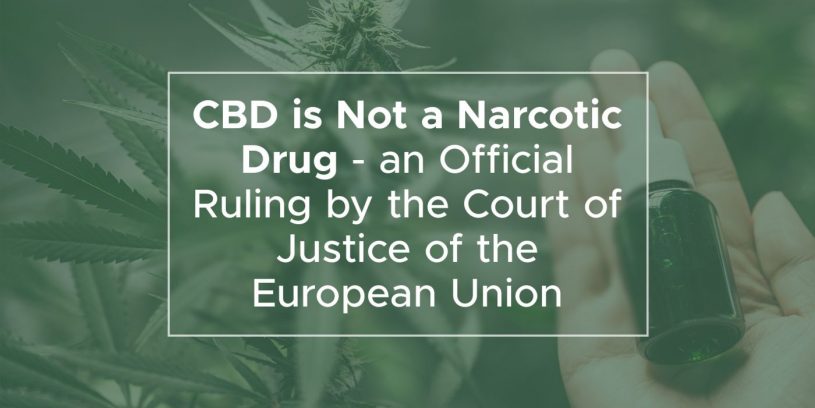 Natural cannabis phytocannabinoid Cannabidiol (CBD) cannot be considered a narcotic drug. No psychotropic or harmful effects on human health have been identified with the use of natural CBD products.

Legally manufactured CBD products must have the same free movement of goods as conventional products it is not a narcotic drug. Every country that wants to ban CBD products legally produced from the varieties of hemp that are allowed to be grown in Europe must first demonstrate clear harm of this phytocannabinoid. The analysis and facts presented must be based on scientific evidence and not on hypothetical decisions.

This ruling was taken by the Court of Justice of the European Union (CJEU) in Luxembourg on November 19, 2020.

The Rules of the Game are Changing

Such a ruling by the Court of Justice of the European Union is a severe setback to countries that are making various efforts to restrict CBD trade and extraction.

There is no clear regulation of CBD products in Europe. The market is in a grey legal area, with some European Union countries allowing the processing of hemp, extracting their active ingredients and marketing CBD products containing up to 0.2% THC, and others baning products from hemp flowers and allowing the cultivation of hemp for seeds and fiber only.

Lithuania and France have some of the strictest laws on CBD products in Europe.

In these countries, the processing of cannabis and foods containing cannabinoids is prohibited. Therefore, farmers are forced to sell hemp flowers to foreign countries. Not surprisingly, due to the current bans, these two countries are the largest suppliers of cannabis flowers in Europe. Let us also not forget that a synthetic substitute for CBD or a purified CBD that has the status of a drug is legal.

That’s How It All Started

The Court of Justice of the European Union has been asked to assess a dispute over several years concerning the trading of CBD vaping liquid in France. In this country, laws prohibit the production and sale of hemp products but allow hemp to be grown.

The case was focused on KannaVape, a company that sold CBD vaping products in France that were legally produced in the Czech Republic. Two owners of the company, Sebastien Beguerie, and Antonin Cohen, have been prosecuted. They have been sentenced to almost two years on probation and fined for tens of thousands of euros.

The aim was to find out whether the French prohibitions and the European Commission’s opinion that the CBD was a narcotic drug were correct and did not conflict with the general 1961 UN Convention.

The judges acknowledged that the General Convention on Narcotic Drugs and Psychotropic Substances is intended for psychotropic substances to which certain criteria are assigned and that the CBD was not mentioned in the drafting of the general provisions.

The Court of Justice of the European Union has ruled that the French prohibition on the selling of CBD products is contrary to EU law on the free movement of goods.

It is worth mentioning that the United Nations Convention on Narcotic Drugs and Psychotropic Substances, in particular the CBD, has never been banned. The Convention only mentions “cannabis extracts”.

There is No Way Back. CBD is not a narcotic drug

In 2018, a special expert committee of the World Health Organization conducted a critical review of CBD and announced that there was no evidence that CBD could cause addiction, harm to the body, or adverse health effects. The human body tolerates the use of natural CBD completely, furthermore research and the presence of drugs on the market prove that the active ingredients of cannabis can be used effectively in medicine.

In 2019, the European Commission has decided that CBD products should be included in the Novel Food list. This means that certain products that were not widely used before 1997 must meet certain standards and go through all authorization processes before entering the market. The process takes a long time and is expensive, each time the composition of the product changes, a re-authorization of the product will be required.

Knowing that cannabis has been used by mankind for thousands of years, and that cannabis extracts were used in most countries until 1997, has led to endless debate and controversy over the classification of hemp products as “Novel Food”.

A few months ago, the European Commission changed its mind and decided to suspend all processes related to the registration of CBD as a “Novel Food”. The Commission has declared that CBD products cannot be classified as food. It should be classified as a narcotic drug that falls under the notion of “cannabis extracts” according to the UN General Convention on Narcotic Drugs and Psychotropic Substances of 1961.

In this case, any products with CBD or other non-psychotropic, natural cannabis cannabinoids would be strictly controlled and could only be sold by pharmaceutical companies. Following this decision, stores in various EU countries that had previously been allowed to sell CBD products were closed.

The ruling of the European Court of Justice has now “shuffled all the cards” and made it difficult for the European Commission to pursue strict CBD control. Soon, each country or all of them will have to decide together how to change the laws and adapt to the CBD market in the countries. Allow or ban? Recognize the available scientific evidence on CBD safety, or prove (somehow) the dangers of CBD?

To create a transparent market for cannabis in Europe, and to avoid dangerous products, it is necessary to establish clear and strict quality control standards. Manufacturers and sellers of CBD products is not a narcotic drug dealer, and should not be afraid of the future of their business and go beyond the law, and the consumer should not be afraid of receiving an unsafe product of unknown origin.

JUDGMENT OF THE COURT (Fourth Chamber)

Unofficial document for the Media